There are quite many lessons learned from my divorce. This time, let’s look into a lesson from my divorce #1: Temper tantrums are for children. Not for grown-ups.

I met my husband when I was 20 years old. Good grief! My son is now 20 and I look at him and say was I really that YOUNG when I met my “husband”?  Isn’t it funny when we were 20 we feel so mature and bold and free to be whatever we want and do what we want? Now in hindsight, I look back and just shake my head.

When I was 20 years old I fell madly in love with my x husband. I met him in college and was totally stricken in love. I knew right away I would marry him (dumb!). He was reckless, he was dangerous, he was so hot and sexy. He had curly hair and an amazing strong chest, and he had a foreign accent.  He was funny, intelligent, smart and just so much fun. I felt so alive with him.

It was so intense with him. He became my “heroine drug”. Some people are addicted to drugs. Others to alcohol. In retrospect, I was addicted to a verbally and emotionally abusive man. That was my “high”. 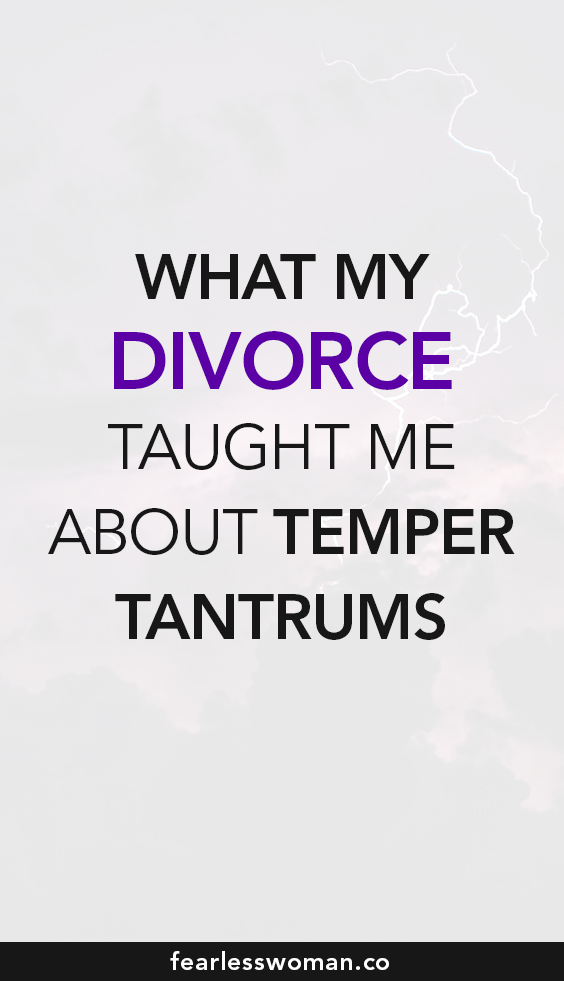 Little did I realize that all of these “feelings” were actually big red flags that should’ve caused me to run away.

You see “bad boys” like my x husband are the exact kind of man you STAY away from.  But, being vulnerable and emotionally needy at that time, I attracted a dangerous man that put me into this intoxicated state of love and security (all fake by the way) that I threw caution out the window and dove headfirst and went so deep with him it took me around 20 years to get out.

Those BAD boys, as sexy and fun as they may be (hey, I get it – been there, done that) are honestly so broken themselves with their own trauma and issues, that they PREY (yes I use the word PREY purposely here) on a weak and vulnerable woman.

Those BAD boys are so broken that the only thing that makes them feel good is to prey on weak woman so that they can verbally, emotionally, or Gd forbid other things (which thank Gd never happened to me, but I know it happens all the time and I am truly sorry and heartbroken for women in this position).  Awful.

To me, this is an epidemic of magnitude proportion and awareness must be brought to all women of all ages all over the world to STOP this madness.

Our marriage was turbulent. He was so moody. He had crazy mood swings that I could never keep up with.  Who was this man?

I started to tiptoe around him, not to trigger him getting angry. I started to be very careful about what I did and who I saw, as I did not want him to get mad. I worked on solving all his problems – money, sex, the house, the kids, the friends, everything. I said to myself, “Revi – it is your responsibility to take care of him and make sure he is fine and you need to save him from his issues of anger and family dysfunction”.

This way of thought was all MY PROJECTION of what   “ I “ felt. Not what I felt about him (or what he felt about him) – this was all about me!!!

I wanted to be rescued in some weird convoluted way. I avoided my issues (typical of emotionally needy and vulnerable women) and instead self-nominated myself to the ridiculous RESCUER role for HIM! (that no one asked me to do, only I asked myself to do).  He had issues and I was going to fix him.

The truth – I had the issues but was too emotionally need to fix myself.

The paradigm shift:  I needed to rescue myself.

Back to Temper Tantrums. I learned after my Divorce that Temper Tantrums are for children in a toy store that can’t by all the toys they want and they throw a fit. Totally understandable and expected.

Temper Tantrums are NOT for adults. Did you know that? I didn’t.  I bet a lot of women don’t know that. The crazy screaming, yelling, spewing ugly words, ranting and raving hands in the air, pacing all around the house like it’s the end of the world – that type of Temper Trantrums from a grown up is NOT ALLOWED. PERIOD. ZIPPO. NO!

Getting into an argument is A-OK (within reason of course and how often).

Arguing over something that is important to you is a sign of passion and opinion of something that matters to you.  And usually, some form of truce or compromise is reached by the two partners.  No one feels “scared”, no one feels like they may get hurt, no one feels like there is so much “noise” in their heads.  Getting into an argument is grown up and adult (again, within reason and acceptability and if it’s every day then NO – that’s a problem. If it’s every few months in a marriage of decades – sounds normal to me!).

WHAT IS THE DIFFERENCE BETWEEN TEMPER TANTRUMS AND ARGUING?

Temper Tantrums are NOT to be confused with Arguing. They are absolutely not the same.

Bottom line – temper tantrums are a form of verbal abuse that makes the other person so afraid of “what’s next”, of putting into such a state of fear and panic, that all this other person wants is to stop the noise, stop the screaming and make it go away.

Further than that, the “victim” (hate to use that word, but it works in this sentence, but honestly this is the worst word ever – more on that on another blog) goes into this state of panic that then says, ok, I have to STOP the temper tantrums from happening in the future, as they are so disruptive to me, what should I do? And all of a sudden a “walking on eggshells” type of side of you appears – that you do everything to AVOID triggering a temper tantrum. You talk, think, feel, plan ahead so that your “husband, boyfriend, lover, parents, best friend, boss” will NOT go into this crazy Temper Tantrum fit. You are now not even being your normal self as you are more worried he will get mad.

By the way, if you and your husband/boyfriend stop arguing, I would worry a little about your relationship. Arguing s not a bad thing, it’s a healthy release of frustration.  Not arguing at all and bottling up feelings inside will eventually lead to a trigger that makes everything explode. Don’t let it get there ever – especially if you are with a good guy (and there are TONS of amazing men out there! I will show you how to find them in another article).

Lesson from my Divorce #1:  Do not tolerate Temper Tantrums.

After I realized this very core difference of Temper Tantrums versus having an Argument, I quickly saw that this “theme” was in my life not just with my husband, but with my family, and my friends and even my kids!  You see the problem here wasn’t THEM – it was ME. What a revelation and what a relief to know that I could fix it as I was ready to do so! I was tired of the temper tantrums and did not want this in my life.

I allowed people to behave this way with me.  To blow up explosively. After learning about Boundaries and applying my 4 step Boundary Model my life changed. Big time.

It took the break up of my family by me leaving my husband of 20 years for me to “grow up myself” and be an adult.  I realized that I was part of this temper tantrum drama. I was the other party right? It takes two to tango – remember that.  I finally realized I was part of the issue and the drama. And that the only person that could change was ME. And I sure did.

Take ownership of your life. It’s the best advice I can give anyone going through a difficult time with their spouse or their boyfriend.  If the man is good, then fight hard to find a balance of compromise as long as there is arguing and not temper tantrums. There is SUCH a huge difference. Learn to tell the difference, and learn to use the Boundary Model to always protect yourself.

Remember, your peace, your inner energy of happiness, safety, security and feeling love and support should ALWAYS and I mean ALWAYS be your number 1 priority.

When you start living this way of being, you will see that others will honor and respect you in a whole new light.

Be free to be you – you are WORTH IT!