Are Temper Tantrums in relationship normal? If your Husband or Boyfriend has Temper Tantrums RUN AWAY! You are NOT his mother! If you are in a relationship or married and your husband constantly yells and screams and hyperventilates with anger and has drama and creates drama and blames all of this on you then I am here to tell you that this is NOT OK!!

Temper Tantrums in relationship are very different than arguing.

In a relationship, it is normal to have arguments. That’s a normal part of life and relationships ad marriages. We disagree, we argue, a compromise is achieved, and we make-up and move on.  Wonderful!

What is absolutely NOT normal are Temper Tantrums!

This is when your husband or boyfriend goes nuts, crazy, yells and screams, doesn’t stop, and is ruthless in his words and his rage.  It is actually very frightening also to see a man behave this way.

This was my story for years and years.  It was awful.

But I learned something powerful after I left my husband of 20 years.

TEMPER TANTRUMS ARE NOT NORMAL FROM A GROWN ADULT.

TEMPER TANTRUMS ARE NOT ACCEPTABLE – EVER.

TEMPER TANTRUMS ARE FOR CHILDREN AND NOT FOR A GROWN MAN. 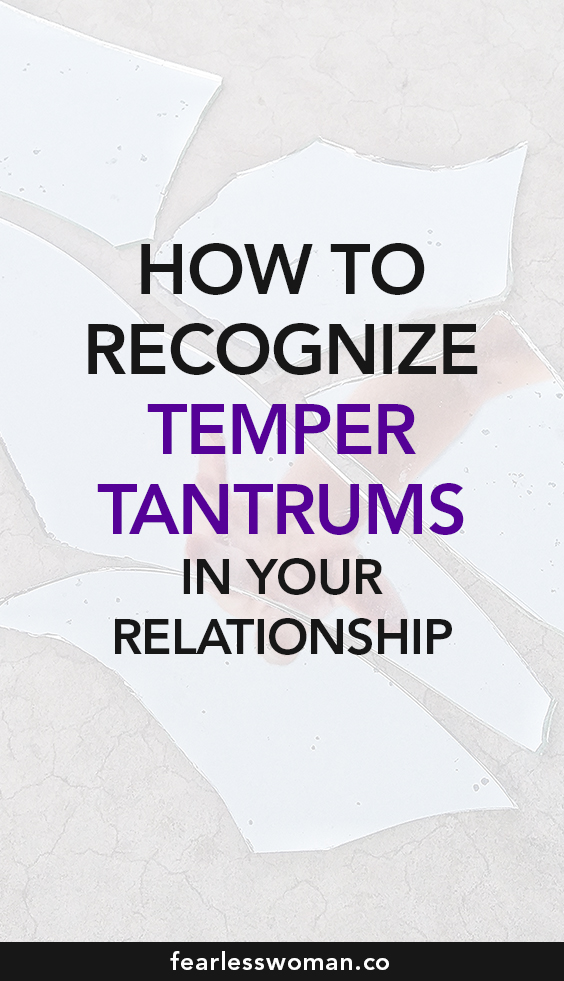 If this man you are with will not do what he needs to do to address why he enters into this “rage” phase, then the only thing you can do is GET OUT and save yourself.

TEMPER TANTRUMS ARE FOR CHILDREN AND NOT HUSBANDS OR BOYFRIENDS.

But for an adult, a grown man, to behave this way is NOT OK.

But it is NOT ok. There is nothing OK with Temper Tantrums. Nothing.

YOU ARE NOT HIS MOTHER

Many of us think that it is our job and responsibility to fix our husbands or boyfriends. That if we just show them, explain to them, teach them, help them, fix them, nurture them. Their rage and anger will stop.

You are not his mother. Your job as his partner is to compliment him, not FIX him.

Many women take on the role of a “mother” with their spouse. They end up taking care of their husband like he is another child. INCORRECT.

Do you see what is wrong here? That is just not a normal relationship. This type of relationship is toxic.

When you start to see that a man who has temper tantrums is a man who has his own issues, you also start to recognize that is it not YOUR job to fix him, but it is your job to protect yourself.

FOCUS ON YOUR EMOTIONAL WELL BEING – NOT HIS!

When you make the decision to focus on you FIRST and take care of yourself FIRST and protect your emotional boundaries FIRST then everything in your life will change.

Temper Tantrums create a lot of trauma for YOU as you are constantly in the “fight or flight” mode of how to protect yourself or how to not have him freak out on you or on your kids. This is absolutely exhausting on you.  And I am here to remind you that you DO NOT have to do tolerate this. This becomes a choice that you have to make. You and only you.

When you make the choice to focus on you and not him, you will become stronger and more conscious that his behaviors and temper tantrums are NOT your fault. They are HIS fault! EUREKA! When you put the onus on the right partner (his temper tantrums are for him to own and for him to fix – nothing to do with you) then you become stronger and more aware of your own emotional well-being.

This is how you become stronger and braver and more conscious of you.

BE STRONG AND OWN YOUR POWER

When we are with a man who has temper tantrums you end up suffering.  We as women worry more about how to not to set him off. We live in a state of fear that something we say or do will set him off. This is toxic in itself. All of a sudden, we have to worry about our behaviors and actions in order to not set him off?

There is NOTHING normal about being in a “relationship” or a “marriage” with a man when you have to worry how to be and act around him as to not set him off into a temper tantrum.

This is when you have to make your own decision to decide what YOU want. As you need to live your life free and at will, to be who you are. When you are in a relationship that suppresses your natural way of being, you suffer. Period.  And why? To make HIM happy? To appease HIM? What about YOUR happiness? Have you ever asked yourself that simple question? What about your happiness?

When you start focusing on you and not on him then you finally begin to work on your transformation.

But what really matters is that YOU have to choose YOU.

Be strong, Own your power. You are stronger than you think.

Get my free resources here where I continue to empower and inspire you to be a fearless woman!!